First day of October. First day of new logbook because the old one was getting sluggish in Typora. Must be all the GIFs.

I wrote down the tasks and split them out to figure out how much time they would cost. I hope that will keep me focused until I can launch a playtest at the end of November. 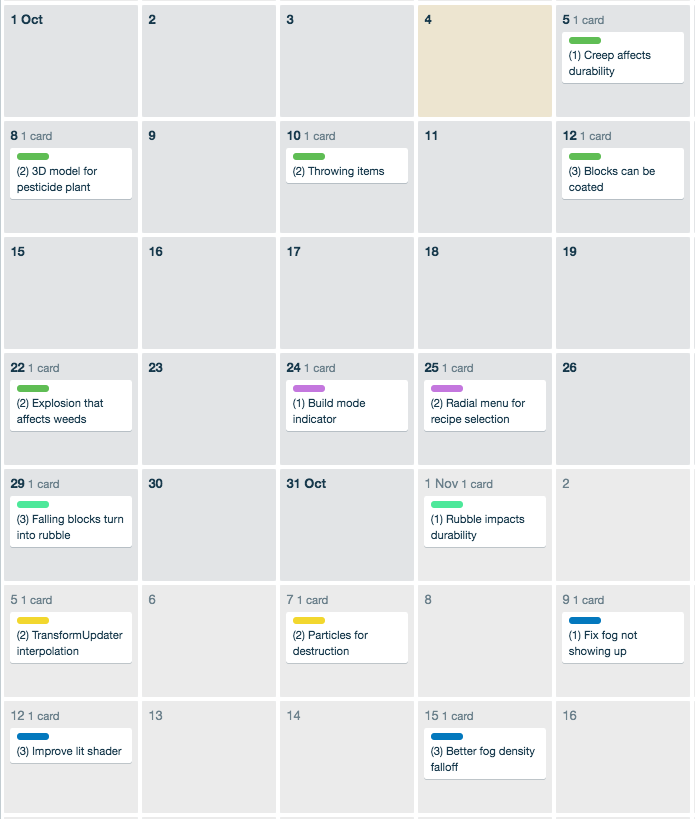 I finished an ECS system that updates the durability of objects and destroys them if the damage reaches a certain threshold. I also did a quick pass on a system for loading in the Config dynamically from a web url instead of always having to do a recompile. Not exactly essential but I think it will save me some time (over time).

Throwing objects works but looks pretty shitty because of the latency between object creation and the actual throwing: 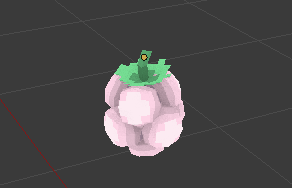 Made some 3d models for the splat plant. Quite cool to see it grow: 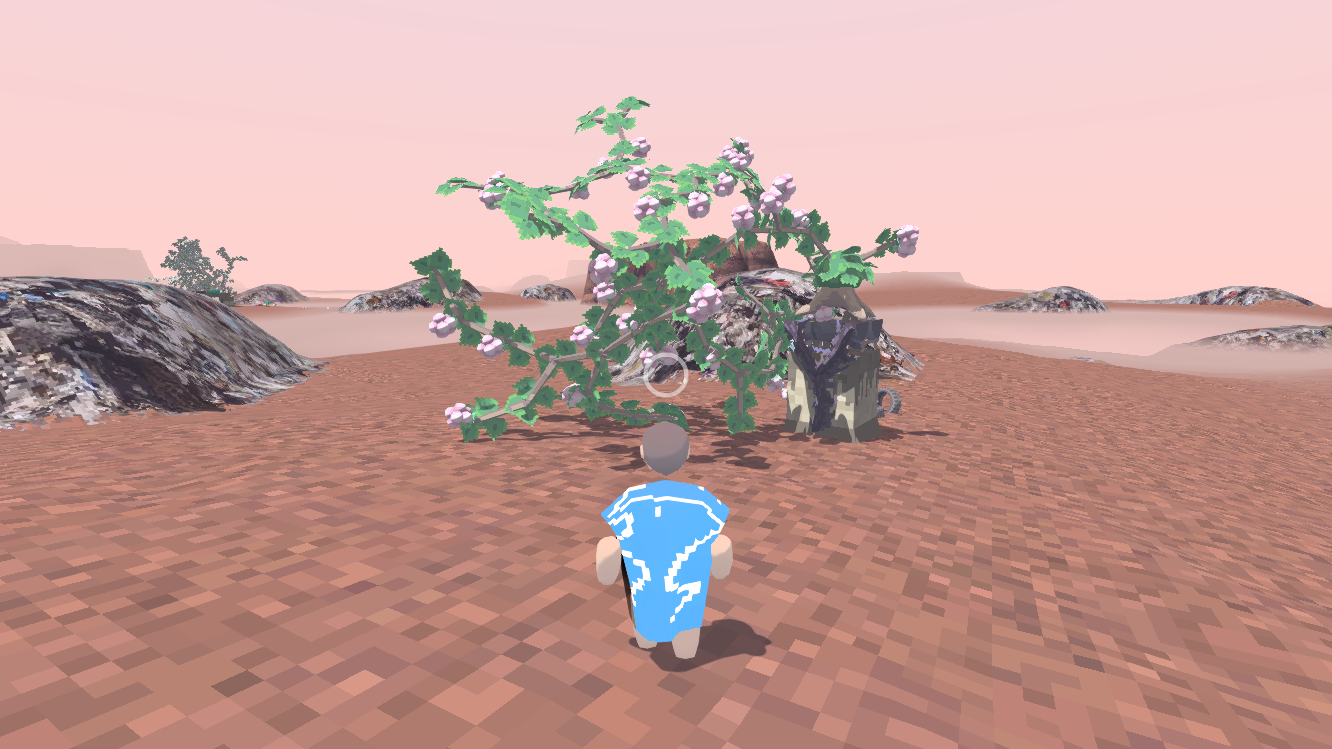 Cutting a plant should be able to yield a bunch of objects. This does mean that cutting the root will again need to iterate over every node to spawn objects. 👈 ‘tis done.

Trying to decouple the plants from SpatialOS to allow a little test unity scene where I can iterate on the plant design. Created a PlantCore class that encapsulates this functionality that will be used by the Network Sender / Receiver classes.

Possible methods for selecting a socket + template for a new node:

How to track the sockets: 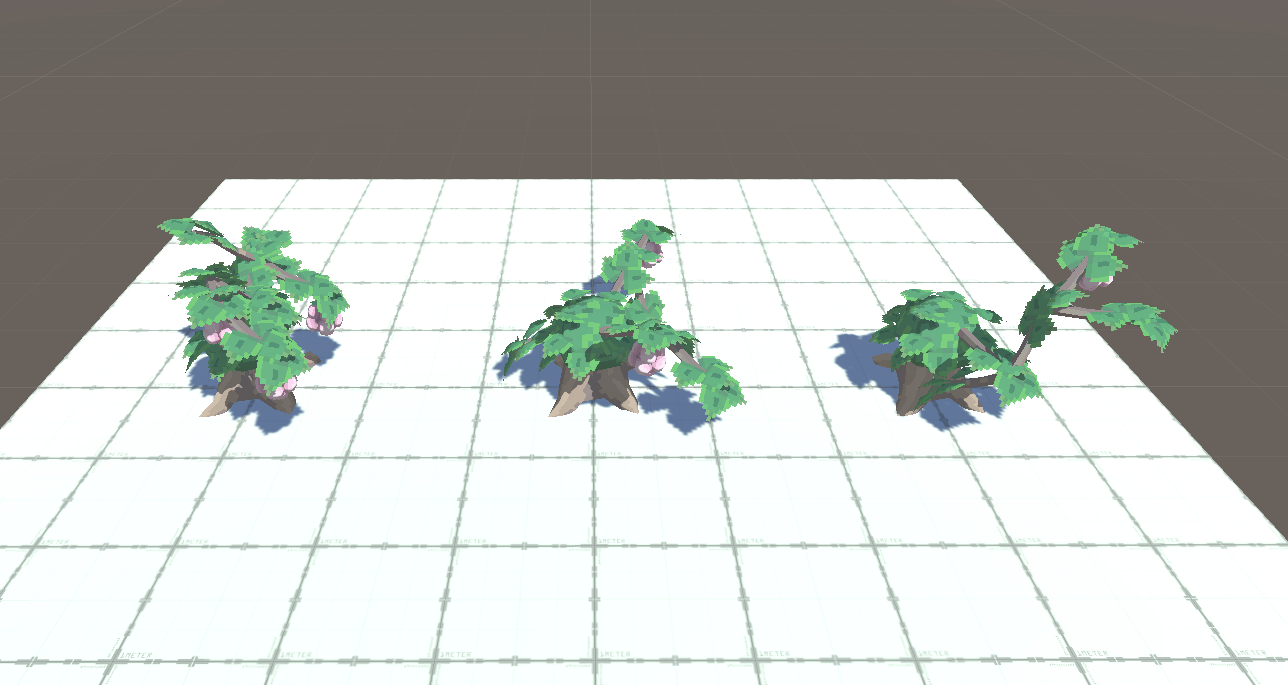 I just need to add a little method for applying durability damage to surfaces.

Did some research on writing a shader that would be able to coat objects in a paint.

Improving the building to be more intuitive. Code wise I think I have to structure it as follows.

Started with giving the player’s poncho some random colors. This really needs more work to look nice, but at least it will for now distinguish players from each other. 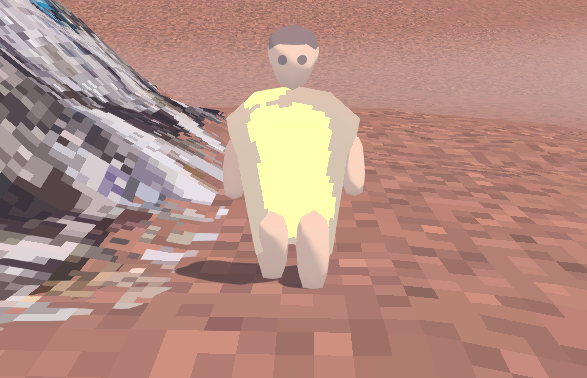 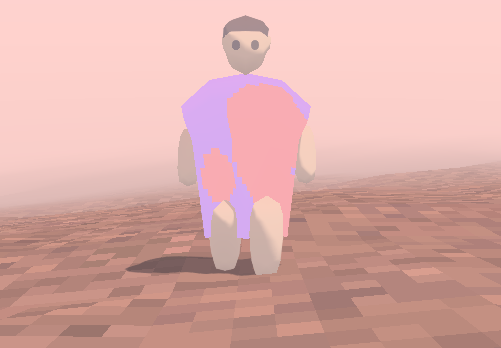 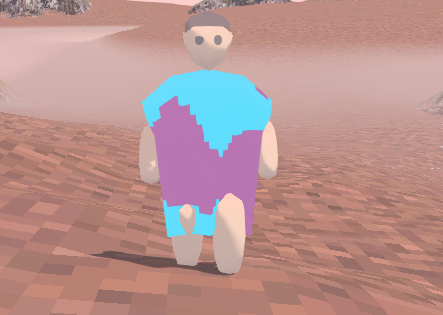 I also fixed a bug that would prevent plants from growing on soil boxes.

Made some rubble models for when buildings fall apart.

Today I’m updating the GDK to the newer version so I can dig into the terrain again.

I have to fix up the HUD code a bit to be able to add new visualisations for interaction.

Over the weekend I started on rewriting the SpatialOS Entity Template system to something more streamlined. Should make creating new object types (like the rubble from previous week) more focused in a single place. Mostly done with the core system, but I don’t think I can migrate the data neatly from the old system.

Made some progress on generating entity definitions for all objects. The engine can’t USE them yet though.

Tue: Hooked up everything into SpatialOS and it’s running again now. Didn’t add a single feature but this will take away a lot of friction in the future.

Wed: Okay, small issue. The blocks can’t really alter their behaviour when moving, because their rigidbodies are kinematic, because the real movement is done by a proxy. I can fix it but I have to write some code.

But now I have some problems interfacing the DurabilityDamageSystem with the DurabilitySender because the latter is a MonoBehaviour.

Thu: Working on the rubble.

Yesterday I fixed up the UI for sending User Reports. It’s pretty neat to just send a screenshot and a short text from inside the game. However, today I need to decide what kind of stuff I’m doing before the end of the month.

Mostly, some kind of ‘score’ for how high the player could build. I have some options:

Taking into account that players will be able to own buildings, it makes sense to require building something to claim the highest spot. Have to take out the high plateaus on the current map as those make it too easy to claim a higher place.

Wednesday: Need to get a bug fixed related to syncing animations over the network.

After that I spent some time thinking about how to dynamically generate meshes for the objects that have variable sizes (like boards, ladders and concrete blocks). It seems really tricky if the size is really variable and not discretized into minimum chunks. And even with discretization, if the increment size is small enough, that would generate a whole bunch of ‘sub objects’ that might be unnecessary. 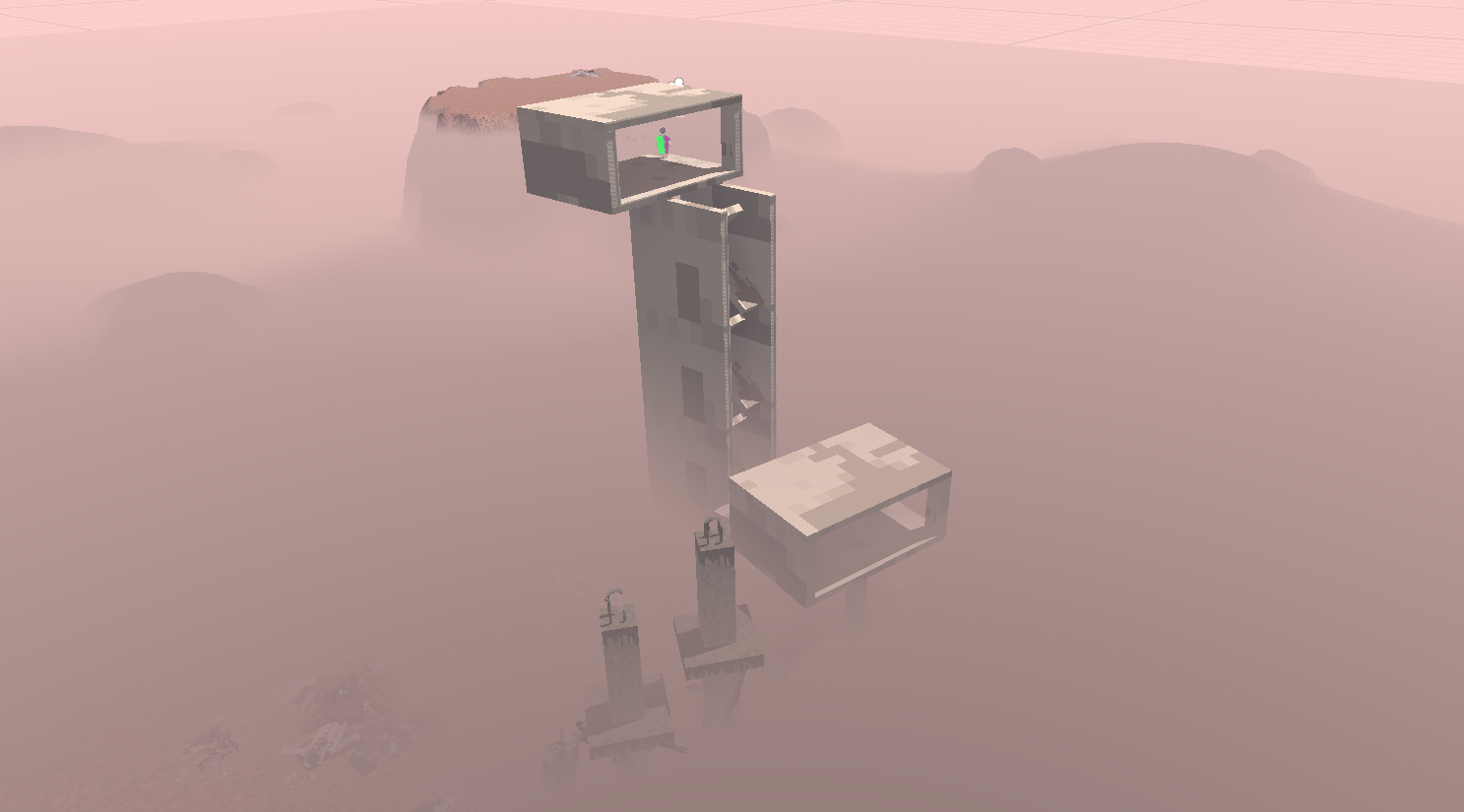 But code architecture is getting in my way. Because a lot of the building behaviour is inextricably tied into dynamically-sized blocks.

I probably need to split things in smaller components that manage their own behaviour. More ECS-like. So:

Super stable in a sandbox scene but in the real simulation it falls apart. Why?!

I’m trying to find out why it’s not stable now. If the simulation settings are different or if the Proxy Body somehow messes with things.

I can also replace the colliders by one box collider for the proxy, but since it works in a sandbox scene I want to find out what causes the difference in stability first!

On the first two days of this week I wrote a blog post about stacking physics boxes. Found out that without ridiculous amounts of solver iterations, 12 boxes is pretty much as high as you can go. Beyond that I would need some game mechanics to mitigate the instability.

One more thing I’m going to research today is whether it helps to create wider stacks. That is something players could learn, that they have to build piramid-shaped buildings or at least support the building through side structures.

So, interestingly it looks like I’ll need additional mechanics to make boxes stable, okay. That’s that then. In 2018.3 I’ll be able to split that stuff out into a separate physics world and maybe increase the iterations on that.

There is one single thing that helps stability, and that is adding Fixed joints. However, adding them to every single block in the tower makes the whole thing behave like a spring. There must be a balance between # of fixed joints, their break force, and their “massScale” that will make the tower more stable but still feel ‘realistic’.

So what can I do today?

That would be a victory.

I did some measuring in the scene and discovered that a texture density of 16px per unit looks about right for this game. Some of the plants have a higher density, up to almost twice as much, and the ground texture has about half that resolution. But 16px looks nice and blocky. 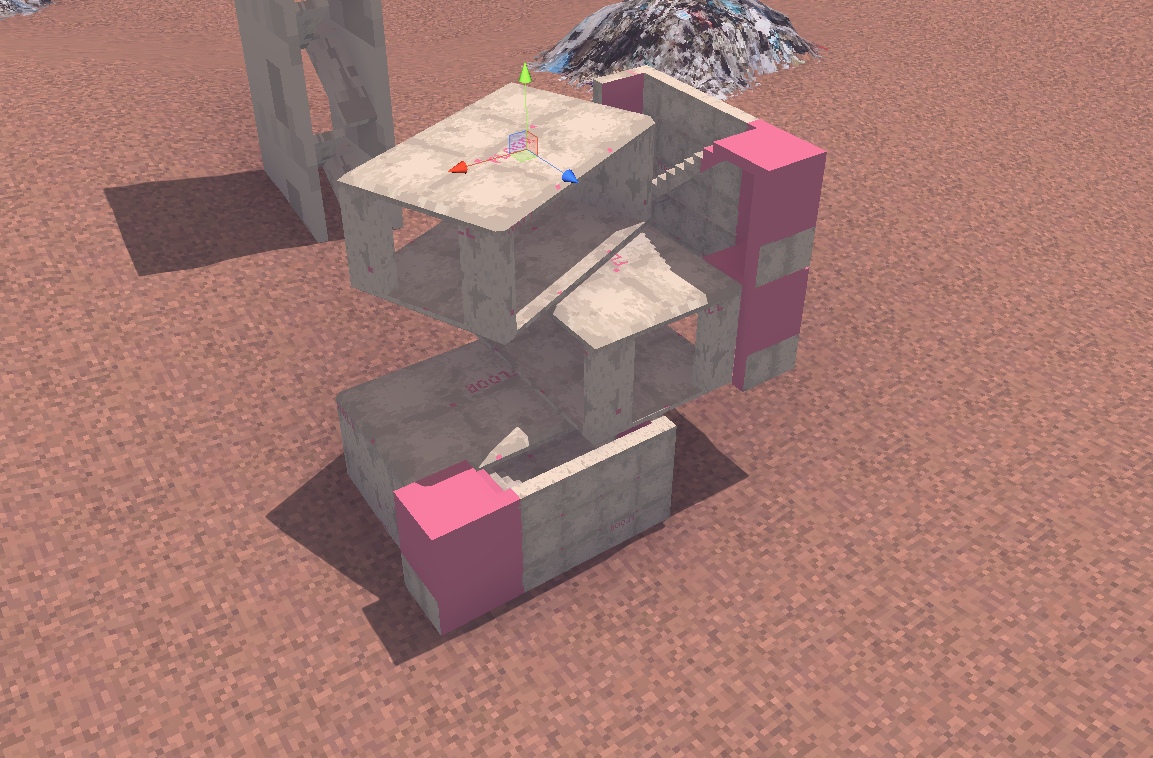 To put plants on the basic prefab blocks, they have to have a Block{Receiver,Sender} component. But the Block components rely on the dynamic size. I’ll have to separate that logic.

Okay, here we go then. 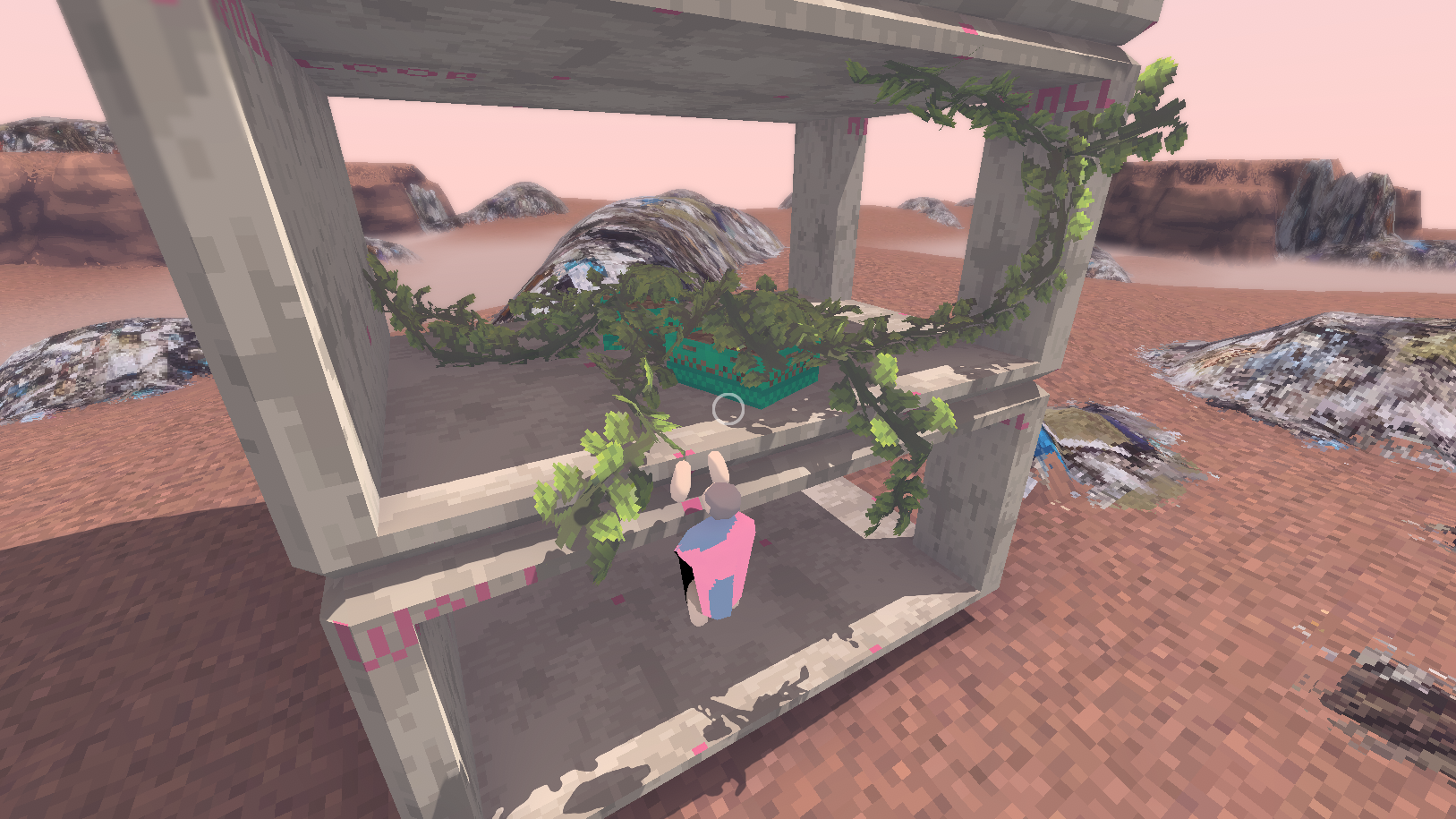 Friday. GOALS: Create a recipe for placing & pinning the big blocks. Should be fun.

Okay, let’s recap what I did last week and what the next goal is.

To wrap this up I need to: 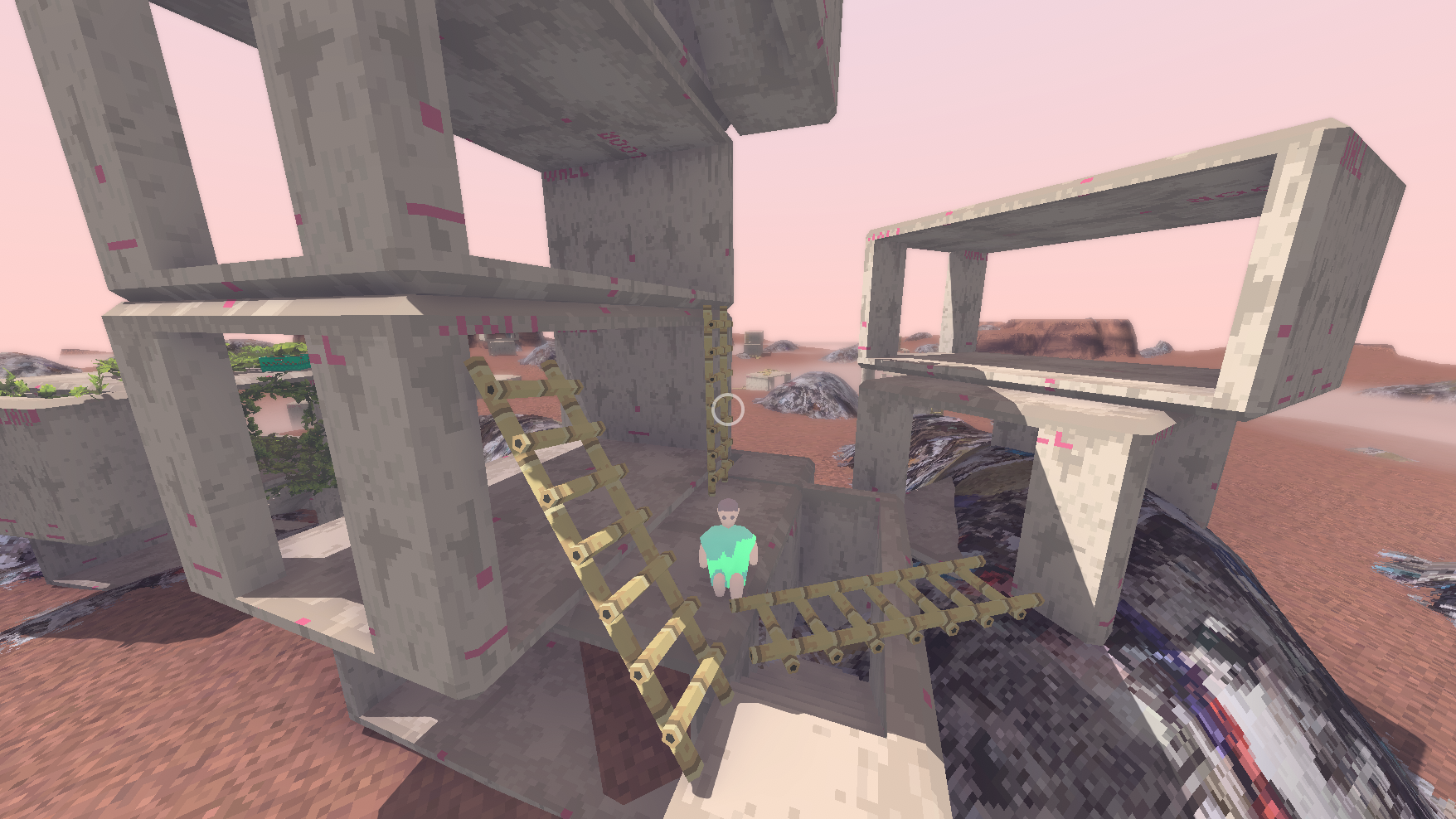 Hello week 49. So last week was good, fixed up a bunch of stuff. Now I have to decide what’s important to get back on track for a playtest.

Going to work on the fog because I need something fun to do today.

Deciding how to set up the Fog colors, as a texture or as a bunch of lerped colors.

I should write more, about what is wrong and what needs doing. And in a more structured way maybe. So right now I feel like I want to ship a little playtest build but I don’t know what the goal in that game would be. What do I tell players they’re supposed to do? Mess around and build stuff? Currently, you just spawn in the world, and you see a deserted world. If you see the tooltips you might dig around in the trash and then build some stuff.

I don’t feel like doing anything but I’m just gonna do some programming stuff to maybe feel productive again.

Had a kind of breakdown last week when I realised how much stuff I think the game needs versus what is actually there. In other words: it’s too ambitious. Now I have to decide how to deal with that realisation. One idea that occurred to me is to drastically simplify the concept. Get rid of all ‘gamey’ things like resource gathering and scores and focus on the idea of a 100% persistent player-built world in its most simplest form.

Sent this mail to Vitor but maybe it’s relevant.

I’ve been thinking a lot and agonising a little about what to do next. I figured my options are A) quit entirely, B) half-quit or C) don’t quit; just continue with more people. And I think B) is what I’ll do. That is to say, drastically reduce the scope to something that I’ll be able to release by myself in the near-ish future. I was tempted to let it go completely and start on a smaller game without the friction of a multiplayer game. But I think there is something there, and I am still really psyched about games with real persistence. (And honestly, with all of the stuff that was broken in the little playtest, SpatialOS was not one of them! It ran like a charm)

So, plan B would consist of me building a small, free, experimental, multiplayer experience where people can build permanent stuff in a world and jump/climb around in that world. I won’t pretend it’s a game. But there can be two outcomes at that point. Either I’m happy that I finished something and I move on. Alternatively: it’ll be a good demo / pitch for finding people to build the whole of ‘garbage country’ with.

Today, worked a bit on the player movement across obstacles inclucing holding ledges and sliding down surfaces.

The next thing I want to enable is for the player to seamlessly hop onto small ledges. 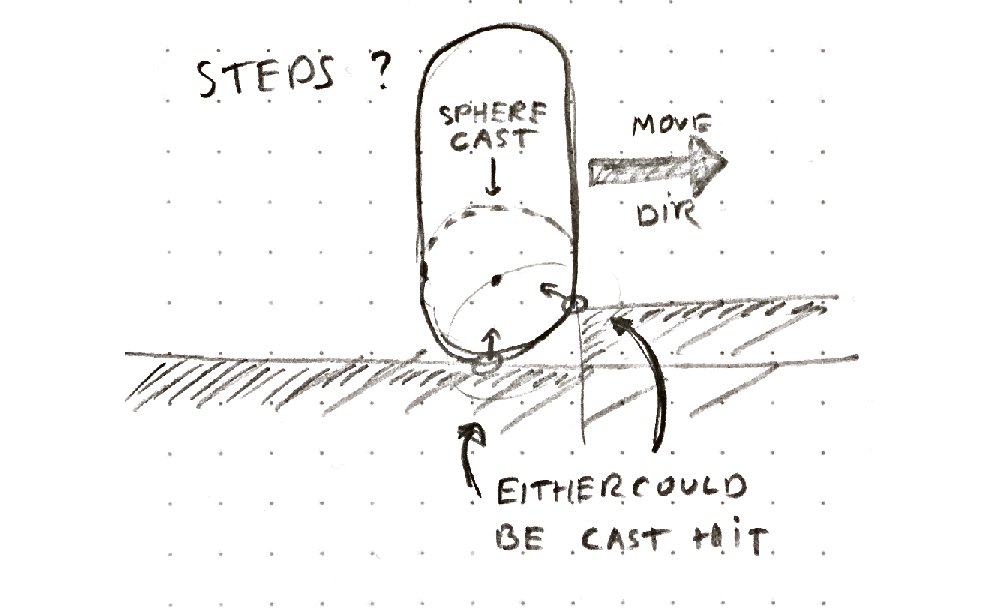 The first approach I tried was with a locked animation. But the problem is that this will hop the player up a slope automatically. Maybe I do need to find a way to make steps a part of natural ground movement.

Brainstorming for a new plan