Setting up a project and workspace.

Work on synchronizing multiplayer controls. If multiple players are to live inside the same simulation, they all have to be able to affect the simulation in a deterministic way.

Blocks can be placed in the world now, but there is no ‘construction’ because the blocks cannot be stacked. Need to create a mechanicsm for actually building constructions out of multiple blocks. This means stacking and snapping the blocks when they are created. 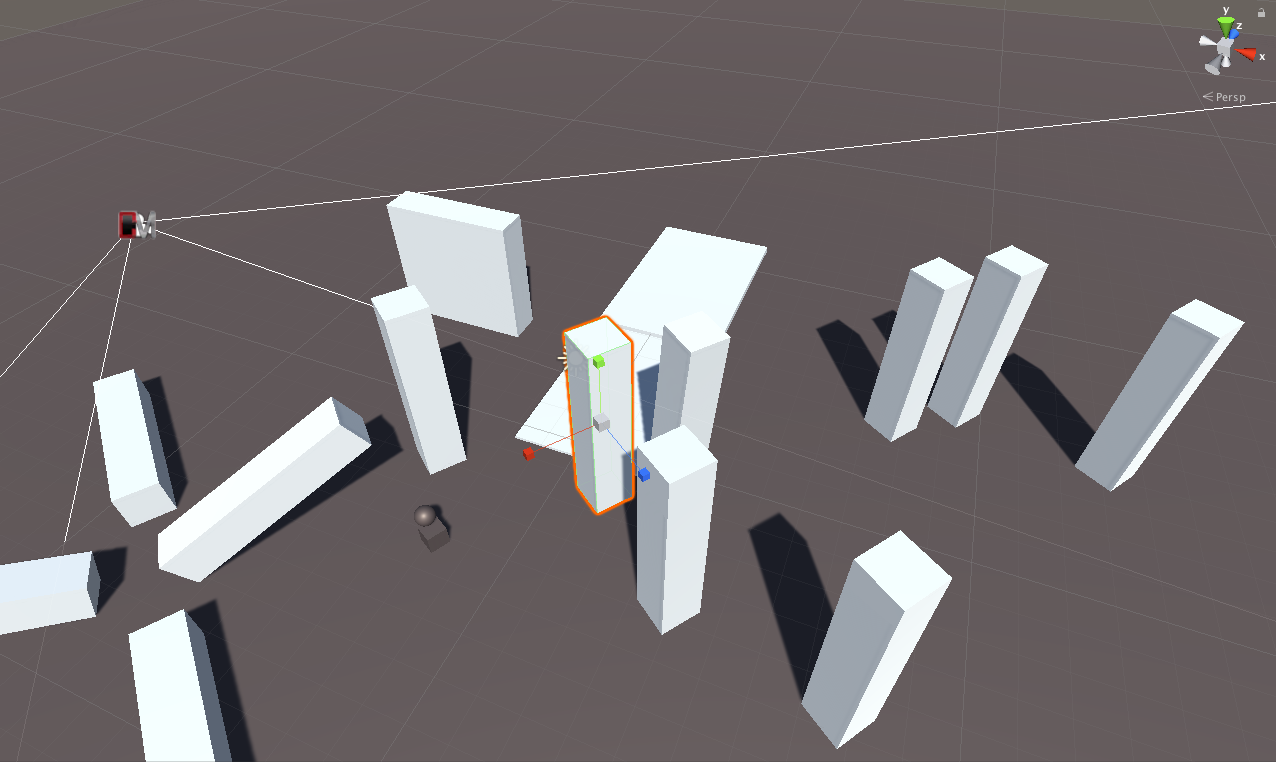 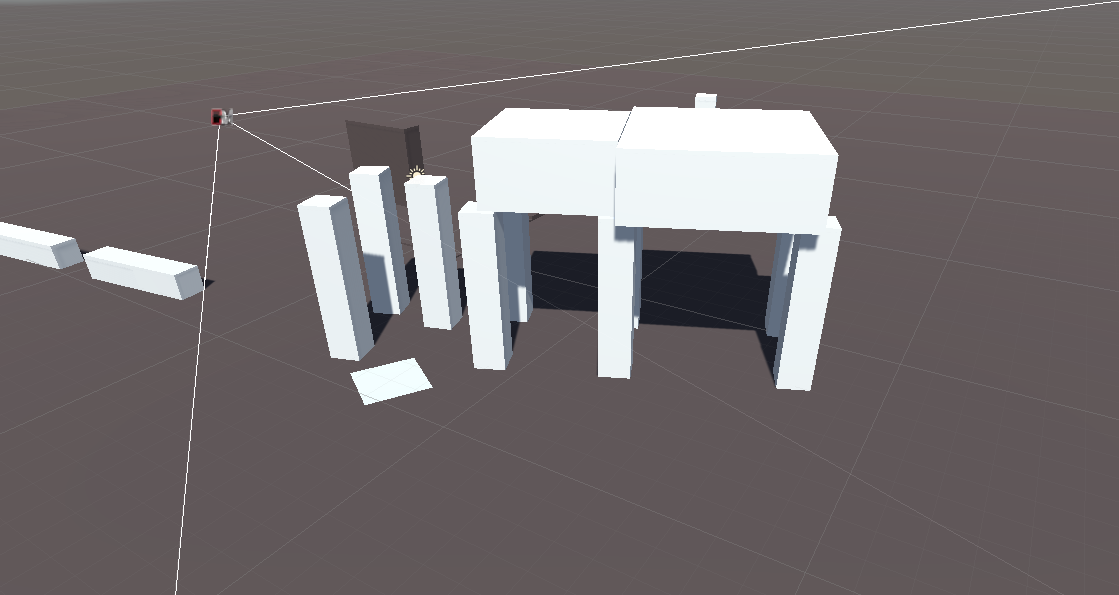 The next step is to figure out how to also update the properties of the terrain (ground) in a networked & physics-proof way.

A terrain consists of a 256x256 heightmap. When a new player connects, this heightmap needs to be sent to that player. Updating the entire heightmap on each change is a waste of bandwidth. So only the updated patches are sent over the network. However, these patches also need to be processed back into the terrain for when new players connect. So it is necessary to keep a list of ‘unprocessed’ patches, which is also sent to each player. This list can be merged into the heightmap periodically.

Currently, construction is made difficult because it’s hard to view the world from a useful angle.

Because blocks can be dynamically sized, they can’t be textured in a standard way (UV coords and an image texture). Generating textures dynamically for blocks is an effective solution 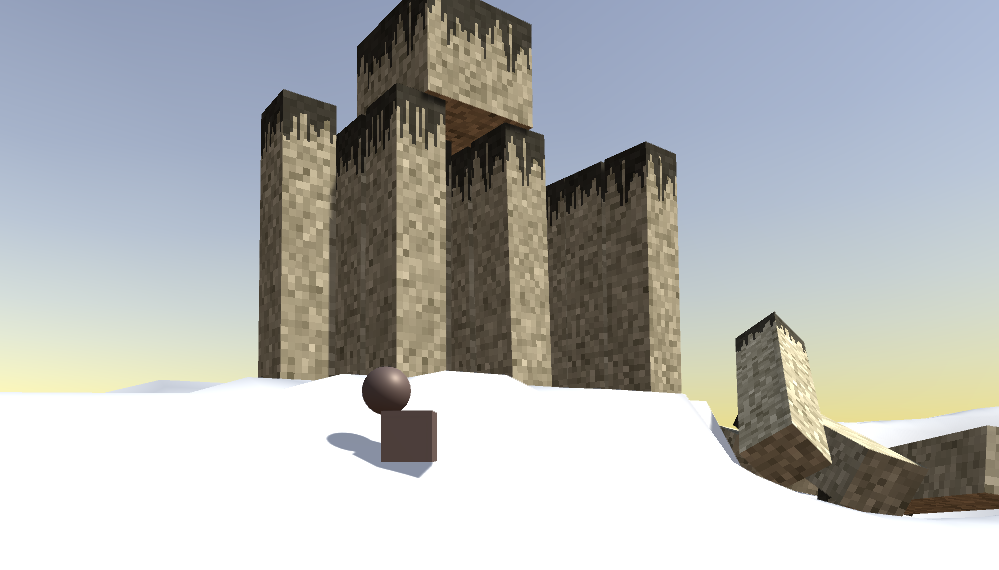 On an irregular terrain, the position of the player locally and on the server starts to drift. It’s not immediately obvious why this happens. 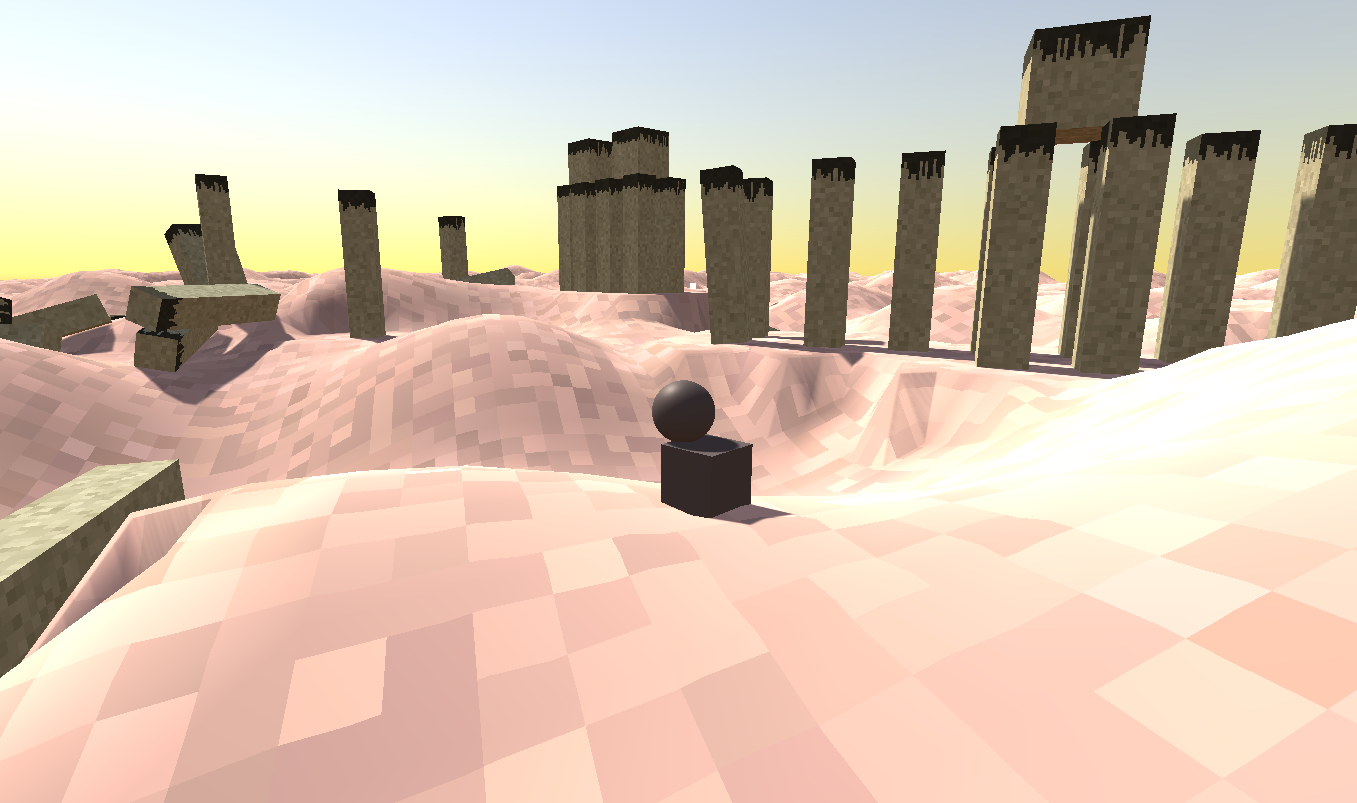 Still the biggest hurdle for building collaboratively in the world is being able to navigate it smoothly and previewing where constructed items are placed. Because the terrain is irregular now (shaped by the players), it would be beneficial if the initial items are ‘fixed’ into the ground.

Pillars that are set on the ground are now anchored into the ground. However, this means that the tops are often at different heights: 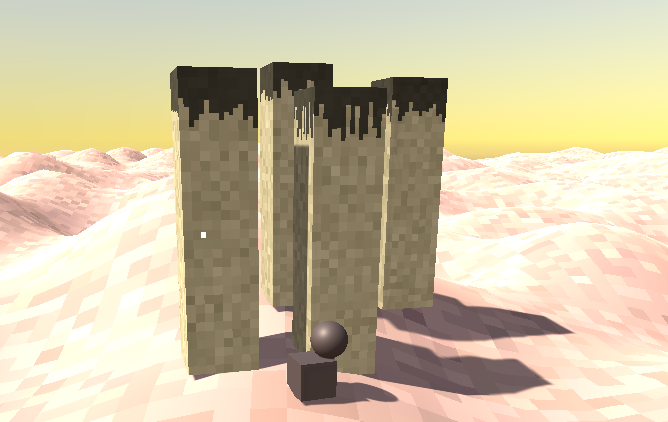 In order to be able to add a floor or ceiling on top of these pillars, they need to be dynamically clipped when building the floor. 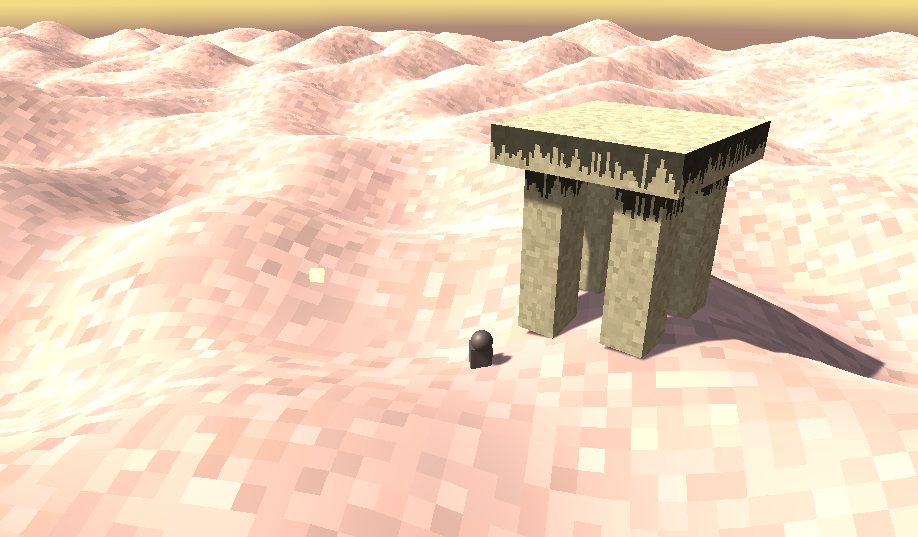 I suspect that this clipping will get really complicated and have a lot of unforeseen consequences because the world is not voxel/grid based. For now, clipping works and pillars can be built on top of other floors.

Today I did a little bit of visual work on the pillars, generating a procedural texture for their dynamic size. And also adding decorations based on their size and role in the building. Pillars can register if they are “supports” which is important for adding additional elements. That is: if a pillar is a support, it can not be clipped so easily when adding a floor. 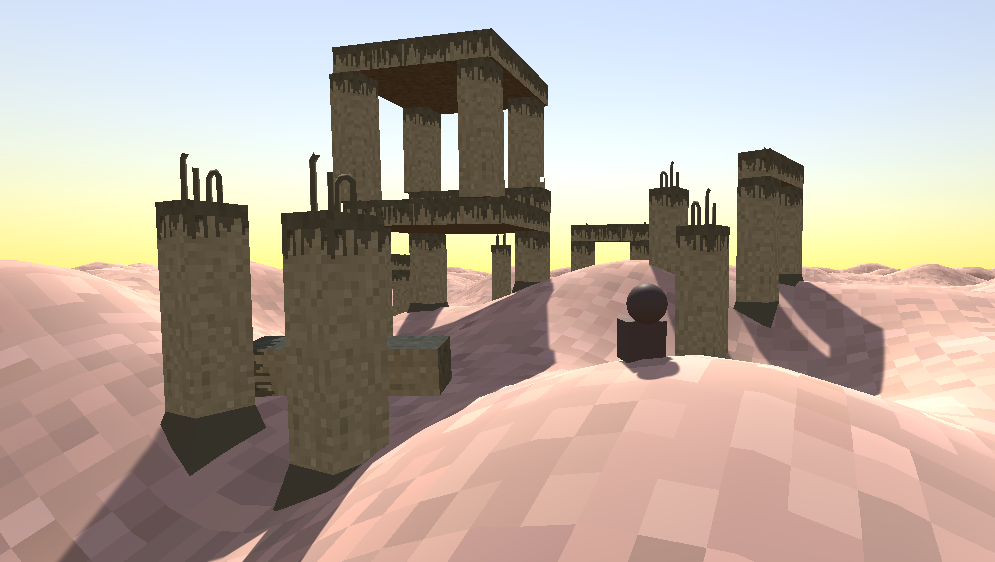 The next step is to create more tools for players to navigate the world. Mostly, being able to build smaller building elements inside the block skeletons (like ladders!). These smaller elements should not interact with the bigger blocks, to save performance. The server architecture will end up something like this:

Working on the smaller construction elements.

Currently, the validation of where blocks can and cannot be placed is starting to get pretty gnarly. It was to be expected that this is much harder in a free-building game than in a voxel based game. The basic system works though, it simply prevents shapes from overlapping with each other. 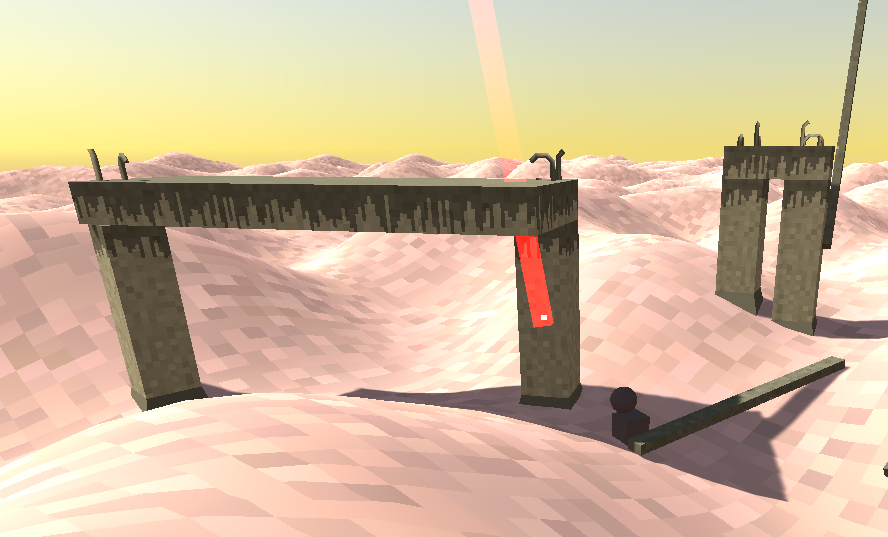 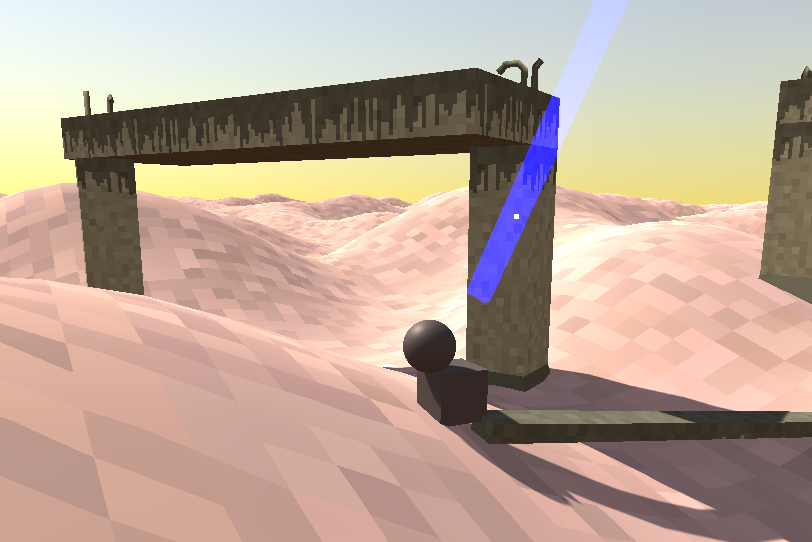 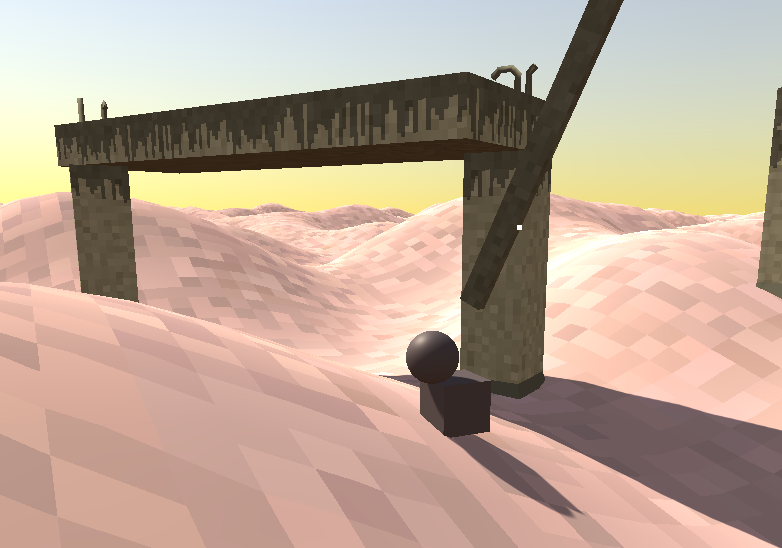 Today I worked on a more robust system for picking up (and placing) objects in a multiplayer game. After some discussion. I am using the following full roundtrip:

Last week I really started running into the classic difficulty of multiplayer games: syncing object state between server and client while still maintaining a pleasant and smooth visualisation client-side. I implemented a method known as “Client Side Prediction and Reconciliation” for player movement. The next step is to apply this method to more complicated movement, such as through buildings or on ladders.

Improved the system for placing ladders, and created a way for players to interact with those laters. 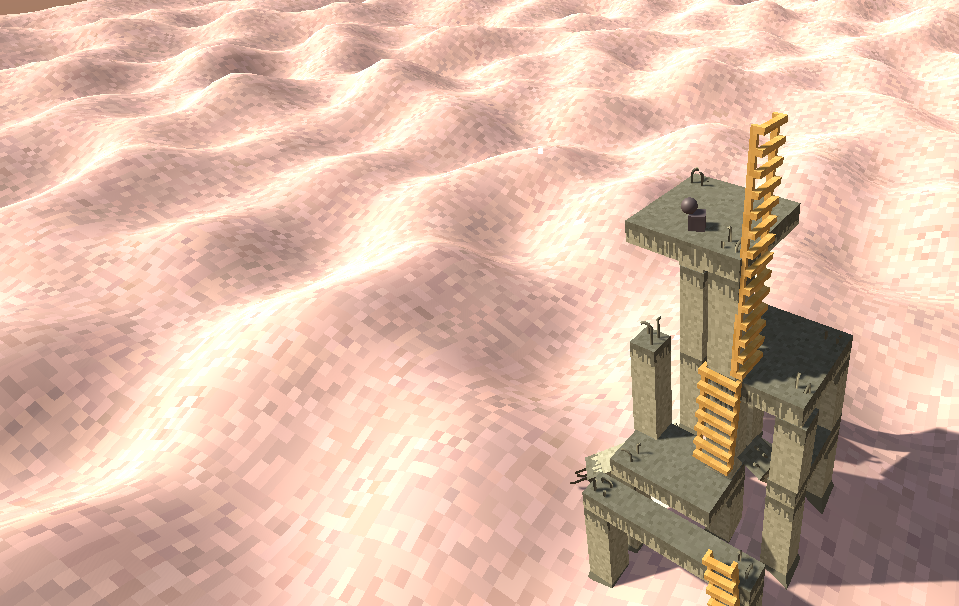 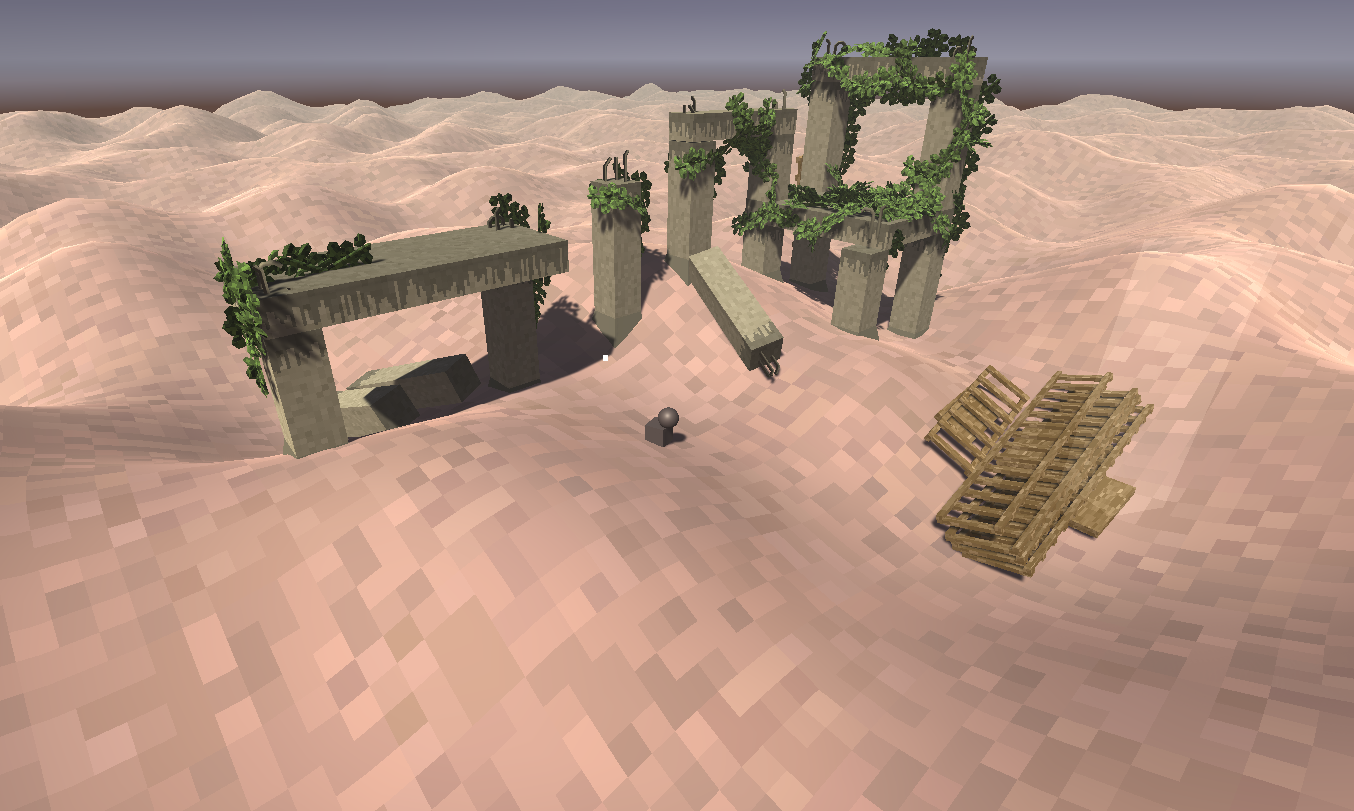 A big obstacle is still the user controls. It is unclear where and how blocks will be placed when clicking the cursor.

A problem that exists currently is the that modifications need to be ‘atomic’. When creating a new block on the server, other blocks are modified even before it has been decided whether the new block can even be placed. To fix this, instead of immediately editing other blocks when a command comes through, a list of blocks that should be modified is cached until it is certain that the command can succeed, then the cached list is processed.

This week I also introduced stairs. On the server, stairs are simulated as a rectangular block, just like any other, only on the client do they render as stairs when a variable “stairs_angle” is set. 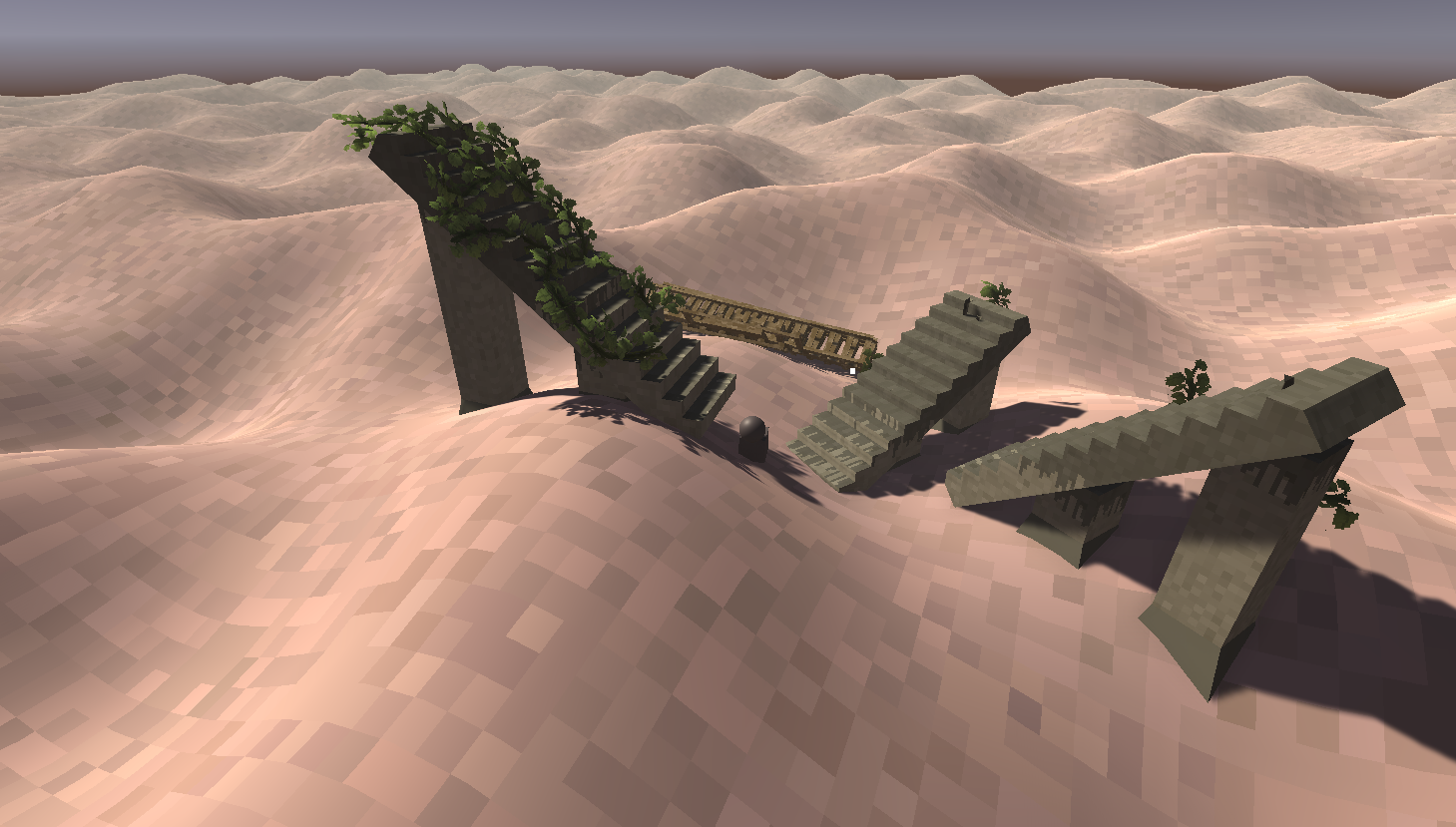 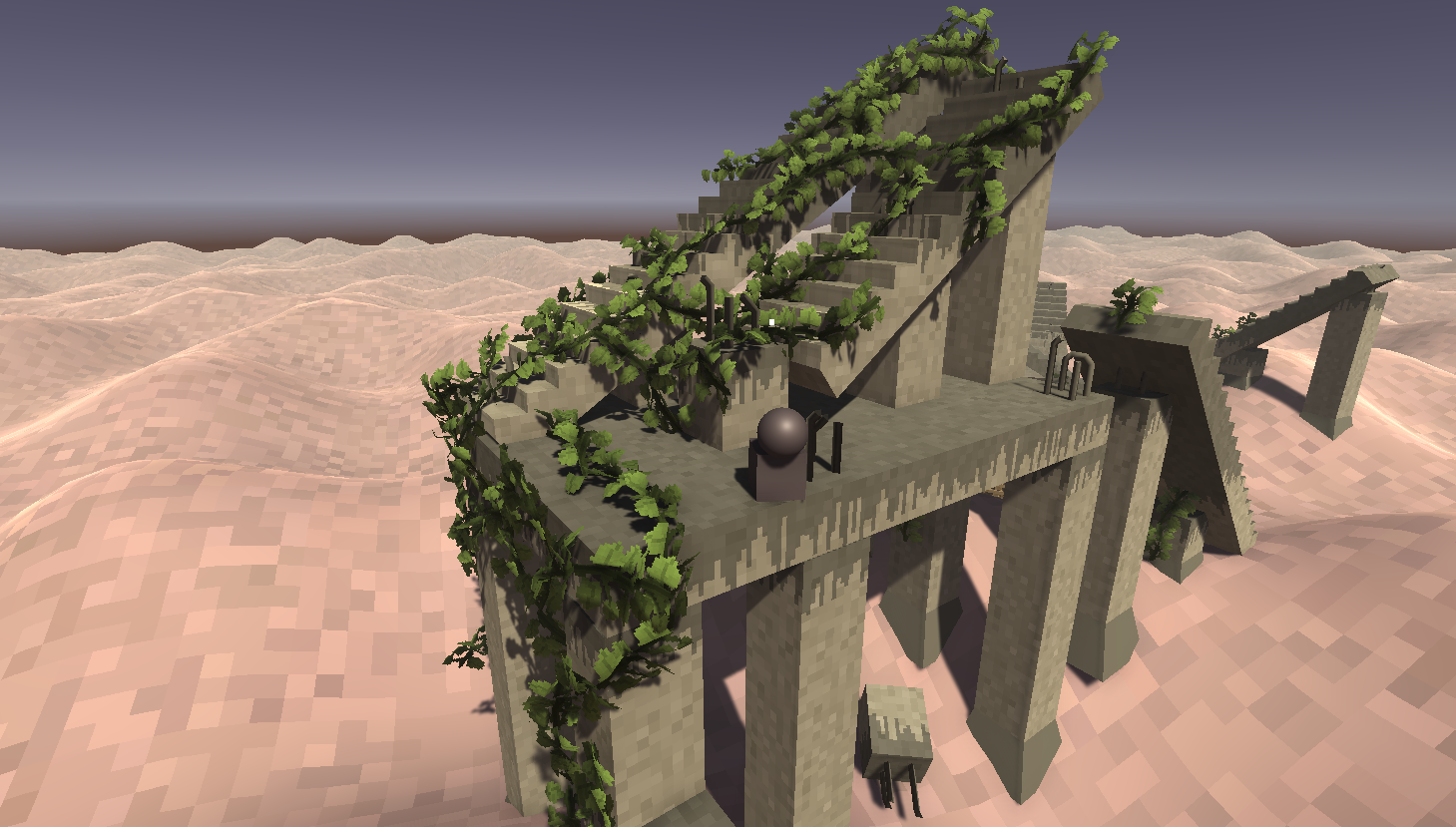 To stabilize the physics when adding stairs (which are diagonal blocks), they probably need some supports so that they can rest “flat” on top of pillars.

I added some simple code for jumping: setting the velocity.y of a rigidbody. Unfortunately this turned out to be naive. The current Prediction/Reconciliation strategy is not precise enough for fast movements.

Part of this project is about introducing dynamic interactions with the terrain around the player. Now that most block construction works, it’s time to focus on that a little. When buildings topple, the parts should turn into rubble, rubble falls down onto the terrain, and causes the terrain to change (i.e. the rubble forms a heap).

This week I want to do some prerequisite work for splitting of the “large scale physics” server into its own C++ program. This means much stricter management of the entity authority lifecycle.

Today: more efficient patching of terrain height, and adding the ability to actually modify the terrain type as well. (Adding a simulation of growing grass and debris that stays around after player buildings crumble). 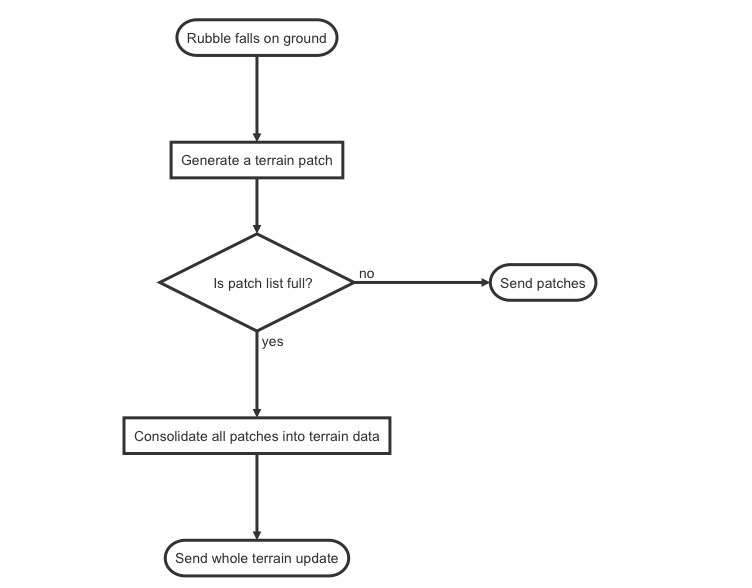 Now that patches are sent as a relative height update and not as an absolute value, this becomes problematic. Sometimes a patch is processed twice because of unreliable transmission. But when a relative patch is applied twice, the terrain is changed twice. A patch with absolute values would not have this problem.

This is a kind of tricky problem. Should I send the current light-weight delta updates or full heightmap values. 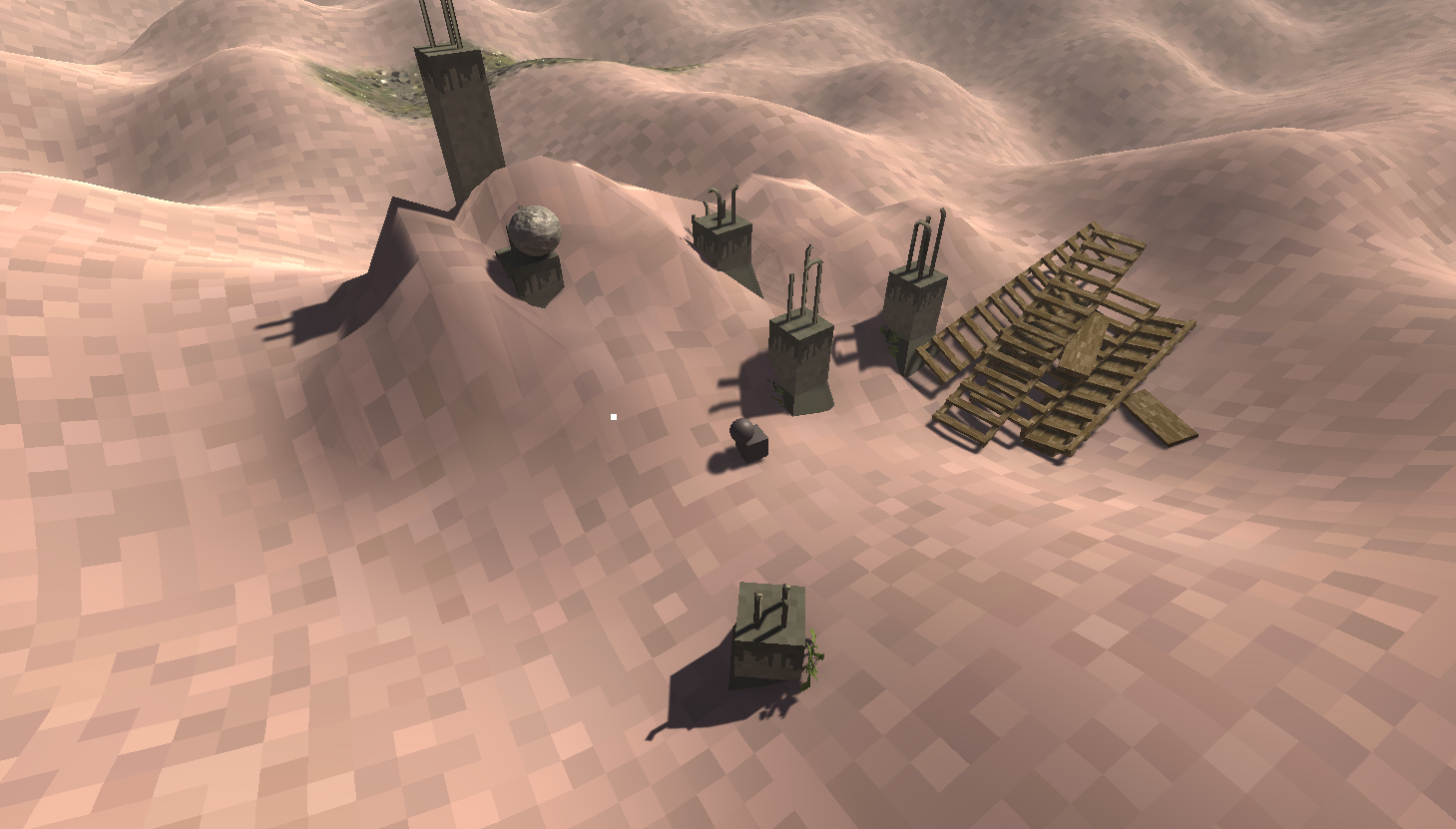 I wrote a system that could be extended to process both light weight updates and full patches.

In order to make sure that the world does not become cluttered with unused blocks—some automatic cleanup is desirable. This could be done by slowly decaying blocks that are not supporting any other blocks. I.e. single pillars on the ground. However, detecting whether a block is supporting another block is not trivial. The entity data already contains a support flag, but that only keeps track of the block’s initial state. The blocks would have to constantly poll for a block on top, and I’m not sure if that is a good idea.. 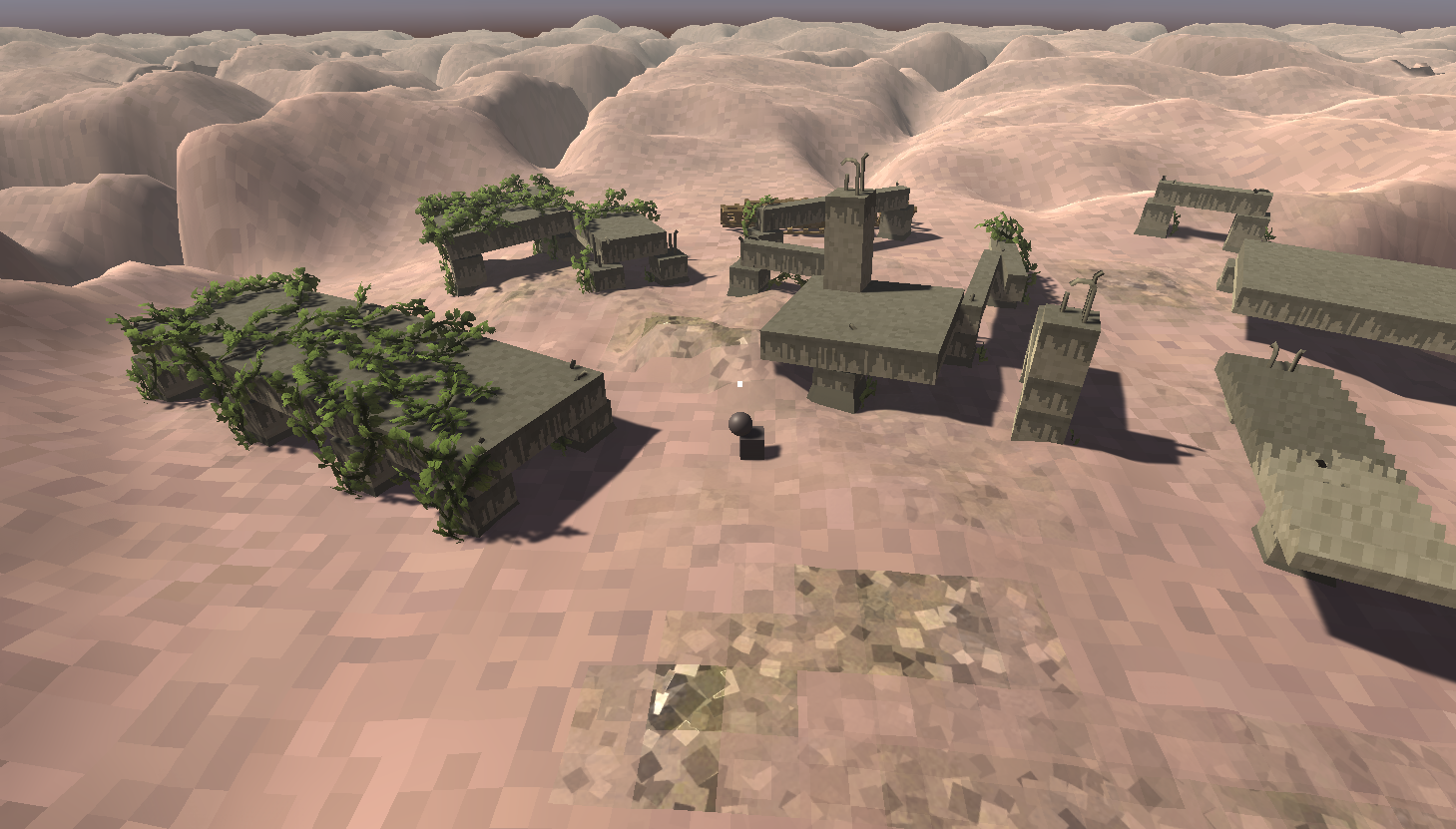 Part of the research goal is also finding an efficient distributable way to simulate dynamic athmospherics. A fog represented as a heightmap is a good initial representation that looks good from a high angle. However, when viewed from a low angle or from inside, the illusion falls apart. 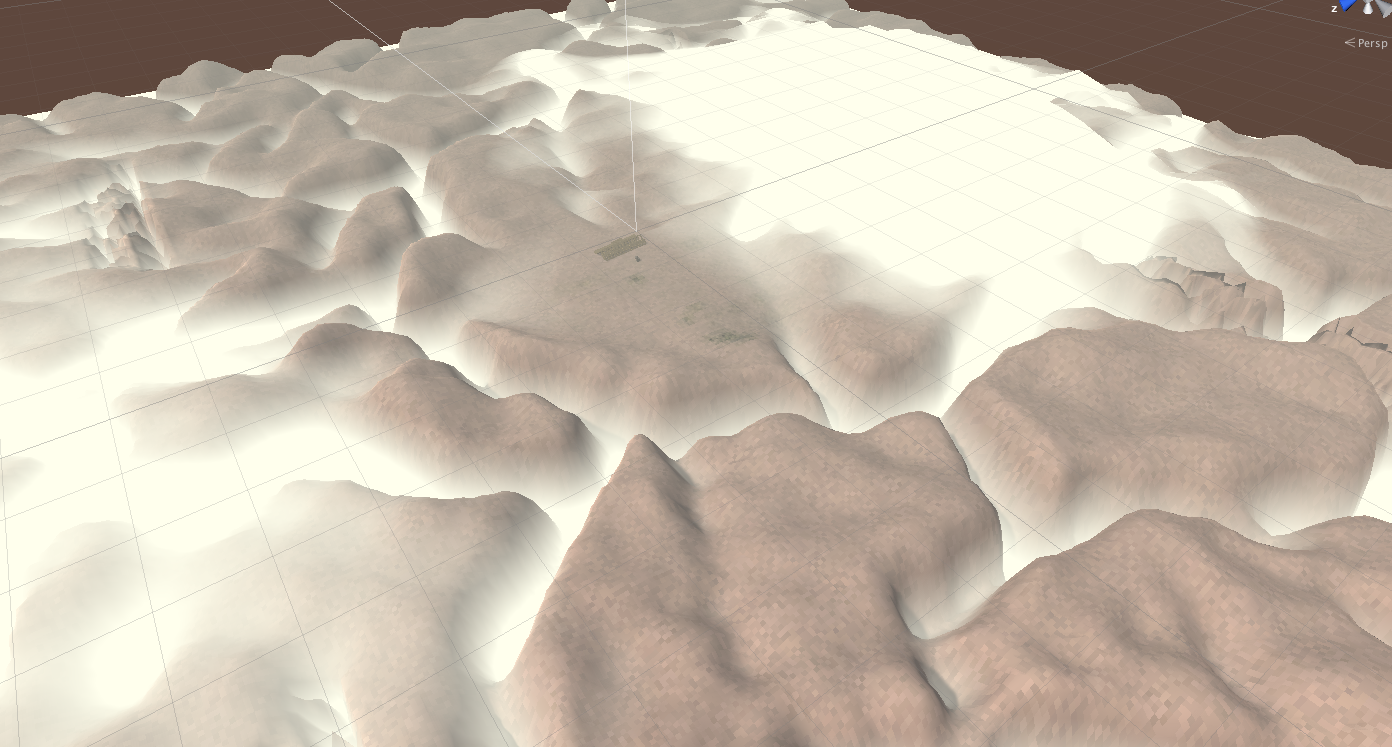 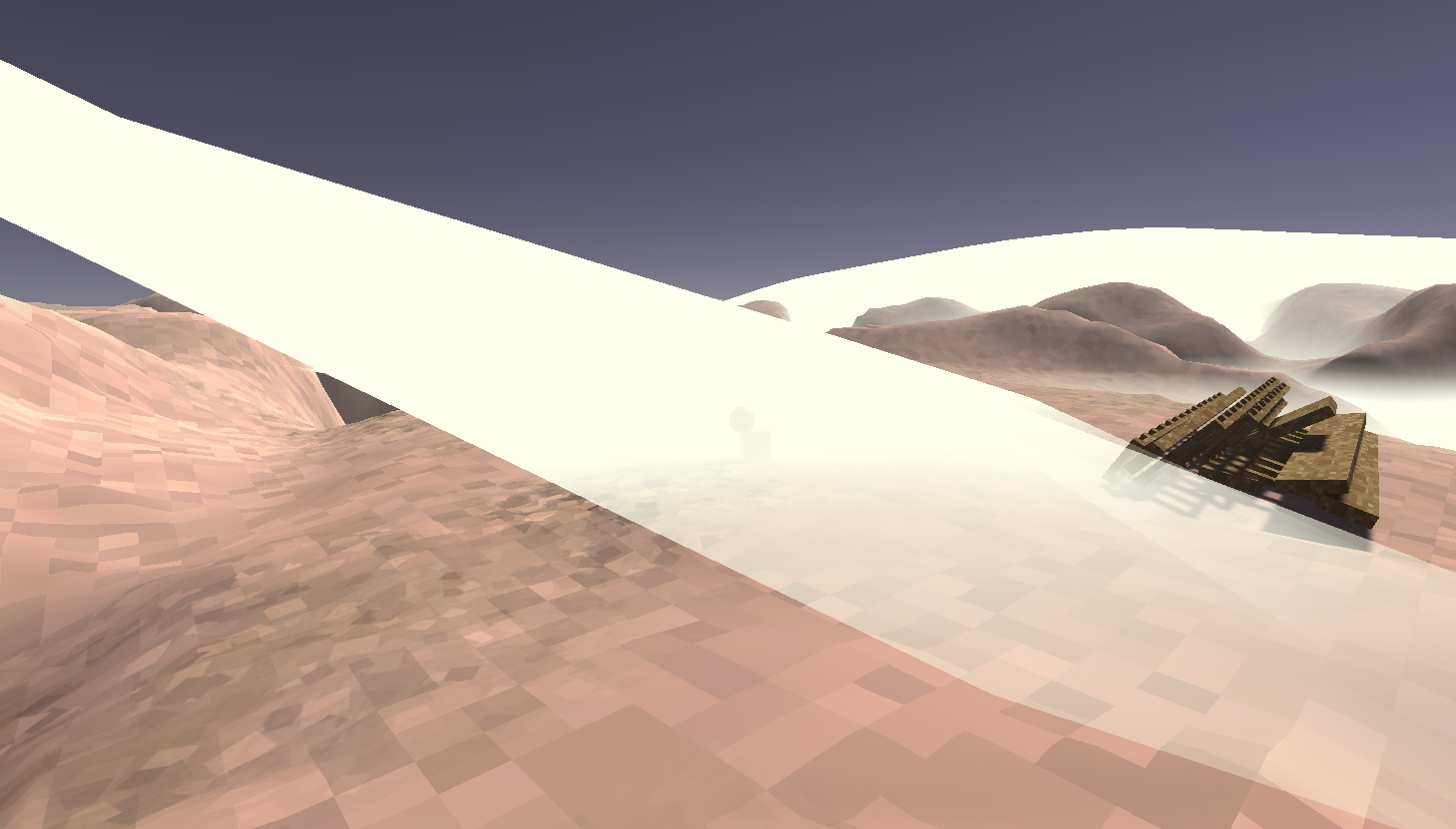 Last task is doing a revamp of the vine datastruture. Storing vines position relative to the last node, instead of storing each node’s position and rotation independently will save a lot of data in storage and transmission, and greatly reduce the entity count, which is advantageous for performance as well.

The few days left in this week I dedicated to a camera system that follows the player but takes into account the shape of the player buildings and prevents obstructing the view.